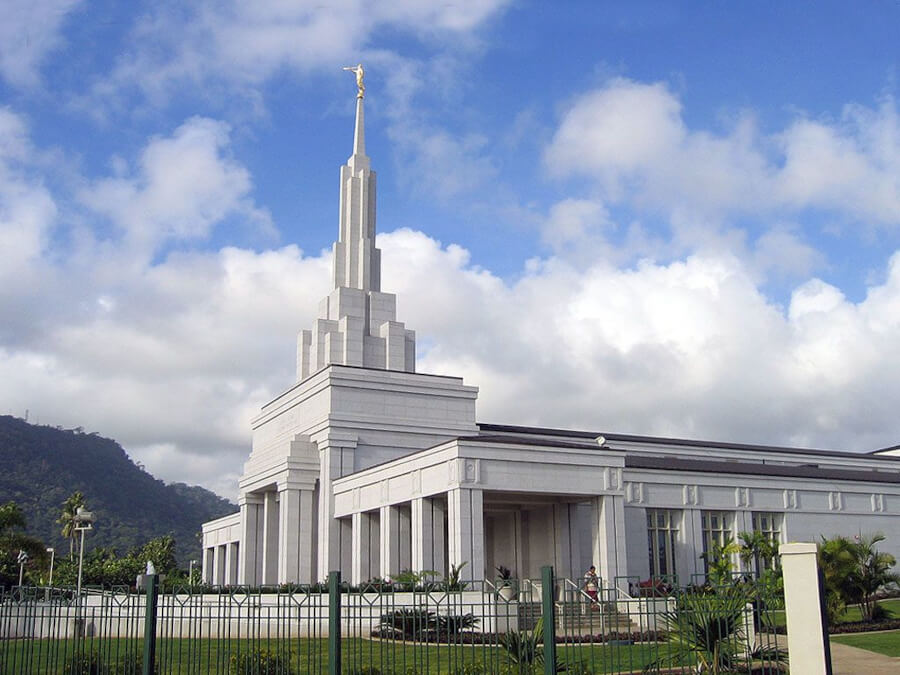 You’ll Find Us Far and Wide

Shown above: The finished Mormon Temple in Western Samoa.

In 1998, an architect from The Church of Jesus Christ of Latter Day Saints (i.e., The Mormon Church or LDS) in Salt Lake City contacted Merrimack Stone. They had seen Vermont’s famous Danby marble and were interested in using it on some of their temple projects. At the time, Merrimack Stone was one of the few companies that cut Danby marble from blocks.

From that initial contact, Merrimack Stone has built a relationship working on 14 Mormon temples throughout the US, from Massachusetts to Nevada, and from Michigan to Louisiana. The typical temple has the outside clad in a white natural stone. After about ten projects using Danby marble, the church architects decided to switch to Bethel White Granite, also from Vermont. The Bethel granite quarry is near the birthplace of Joseph Smith, the founder of the Mormon religion.

In 2003, a Mormon Temple in Western Samoa burned down, and the church decided to rebuild it from scratch. Alex Bilotta, owner of Merrimack Stone, travelled to Vermont to source the Bethel granite for the project. The blocks were sent to Canada to be processed into slabs of varying thicknesses and then they were returned to Merrimack Stone to be cut and fabricated. The finished pieces were shipped in containers to Western Samoa where our team worked on the installation of the stone on the outside of the building. It took about nine months to complete the project (shown in the photo). In 2008, we worked on a temple in Panama – near the Panama Canal – which was our 15th project for the LDS church.

We don’t often travel halfway around the globe to install stone, but when the need arises, you can count on Merrimack Stone to take care of your needs, from on time arrival to professional installation. If 2022 includes a kitchen or bathroom renovation or a fireplace or shower surround, we’re here to help you. While we will go far and wide, our focus is on serving a large area of New England from our Merrimack, NH location.